For those who asked, here is Samantha 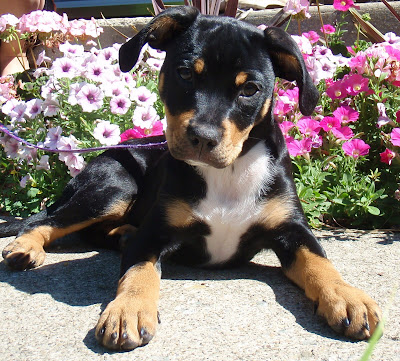 As Christopher recounts on his Republican blog, Samantha apparently put the bite on Democrat state Senate hopeful Dr. Tony Bompiani when Bompiani was knocking on doors.

Christopher said the 39th District Senate hopeful who is opposing Republican Kim Ward "was very nice about it."

Some Republicans apparently wish Christopher was as vicious against Democrats as his dog is. They are now trying to expel him from the county committee for supporting 59th District state representative hopeful Mike O'Barto, a Unity Democrat, over Republican Mike Reese, a Mt. Pleasant Republican.

As for the bitten Bompiani, he indicated there will be no lawsuit.

"You know how puppies have sharp teeth,'' Bompiani said. "She was just gnawing at everything and I put my hand there and he nipped me, that's all."

"I had no idea it was his (Christopher's) house and had never met him before. But he was very nice," Bompiani said.

Christopher said he still supports Ward in the race.

Posted by Perry Christopher at 9:51 AM