I ran into Sen. Kim Ward and Debbie Irwin last night at Beatlemania Now at Greensburg's Palace Theatre. Their seats were right behind me. I had the whole family with me. Rhonda, Liz, Natalie and Olivia all enjoyed the show. It was nice seeing two former county GOP chairs and overall fun people. It was the first time I have seen Kim Ward since she was elected. She is the same friendly and fun loving person she always has been. Chuck Dominick (Latrobe mayoral candidate) was sitting right in front of me. As much as he must have wanted to get into this photo so he could present it as a present to his boss, Tom Balya, Debbie would never had allowed it.

Elizabeth sat in front of Sen. Ward. Liz still loves politics. Maybe some day she could intern in Kim's office. That would be sort of cool. 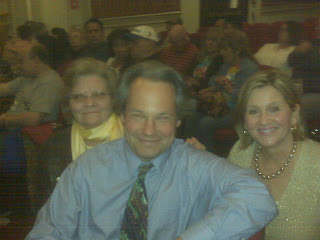 FYI, Three Cool Cats is a song off Beatles Anthology 1. It also applies in this case.

Just so you know, I am not losing my hair. Sort of looks like it. I ran out of the shampoo I like and the crap my kid had in the shower has made my hair stiff. With all the running, it just kind of stays back like that.
Posted by Perry Christopher at 6:40 AM